Along with the expansion of the army, Forward Ordnance Depot was established in Anuradhapura on 18 February 1985 in the Saliyapura Gajaba Regiment Cantonment. The objective was efficient and timely supply of all the ordnance needs of the troops were operating in the North.

THE APPROVED ESTABLISHMENT IN 1985 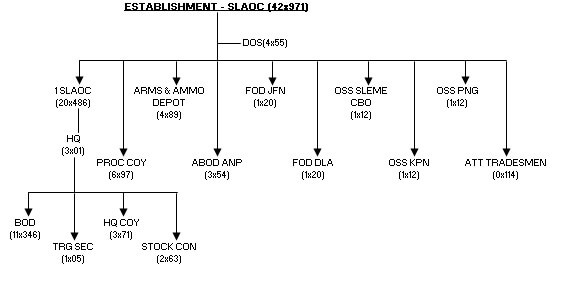 A new Ordnance Factory was added to the Regimental organization on 20th May 1991. The factory was established in Dombagoda and motar launchers, mortar bombs were produced by Lt Col D S G Kempitiya ato. Pivotal role was played by himself and Trip flares were locally produced by Lt Col G W P Samaratunga ato.

THE APPROVED ORGANIZATION OF SLAOC - 1991

The first ever Army Regiment Beat group was formed on 4th November 1992 by SLAOC. Ordnance School which was functioning under the Panagoda Regimental Headquarters was shifted to the Dombagoda factory premises on 20 May 1995. From thereon, the Ordnance school demonstrated its capability and esteem with an excellent service to the Army by providing training for soldiers making them professional soldiers.

Since the inception of the Army, the ammunition stores which was located at the Army Headquarters was later on shifted to Kosgama Salawa Camp on 15 April 1999 and raised as the Central Arms and Ammunition Depot.