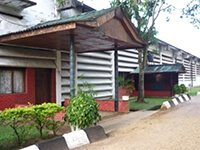 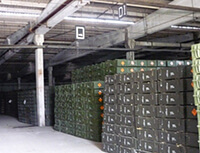 As there was lack of space for proper storage of Arms and Ammunition, the Central Arms Depot was established at the premises of SLE Regt, Panagoda, 10 store houses at Dombagoda and 2 store houses in RHQ SLSR at Ambepussa were constructed to store the Ammunition. Further underground and on-ground dumps were obtained from the Government Ammunition depot in Welisara to store Ammunition and Explosive.

Since the needs for Arms and Ammunition were increased due to the war, an Ordnance Factory was established in Dombagoda. This facilitated to produce motar and motar bombs for the use of the Army. The 'Kempia' Motar and their bombs are one of the product of this factory. 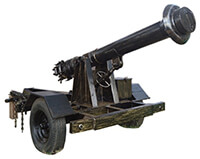 A unit was established to refill ammunitions, both small Arms ammunitions and heavy weapon ammunitions, at the Central Arms and Ammunitions Depot (Kosgama) with 1 x 12 disabled Officer/soldiers during the period when Major DSA Dehiwatte ato was serving as the Commandant. Refilled ammunitions were used in annual firing meets. Two 550 RLB machines made in USA have been given for this task and helped refilling of up to 800-1000 rounds per day.

For training sessions, 9mm, 23 mm, 38 mm, 45 mm and 12 bore ammunitions are being refilled and 20,000 and 18,500 rounds have been refilled for training purpose in the years 2013, 2014 respectively.This unit also performs repairment of corroded ammunitions and mortar bombs and also the refilling and repairment of 25 mm pounder ammunitions for guard of honors.

A course on refilling of Ammunition commenced on 30 October 2003 and this initiative still continues as a project. Some of the training Ammunition needed for the Army are refilled through this project. Ammunition repair workshop has also been established. Arty Ammo and type of Motar Bombs were repaired with the help of a group of experts of the Ordnance Factory of Pakistan.

Forward Ordnance depots were established in the following units/locations to issue Arms, Ammunition and Explosive to operational requirements.

Computerizing of weapon numbers released to units started on 20 September 2010. Stock reports were obtained from the each estbs on 01 December 2010 which indicated more than 130,000 discrepancies. They were divided into 13 categories and were resolved under the supervision of Col HL Guruge AATO.

As a result of a discussion held between Col HL Guruge AATO and Mr. HAS Smaraweera, then acting Auditor General, Auditor General Department on 07.10.2010, a group of 8 auditors reported to the Kosgama Camp for the first ever physical stocks inspection of Arms and Ammunition.

With the end of three decades long war, it was felt that inadequacy of space at the stores complex of the Kosgama Camp to store the excess Ammunition and Explosive. Therefore, it was decided to establish the Central Arms and Ammunition Depot at Veyangoda Camp on 28 February 2011 in accordance with proper storing regulations.

Role and Tasks of the Centtral Arms and Ammunition Depot