The 2nd Regiment of the SLAOC started as a Store Section at the Saliyapura Gajaba Regiment Camp on 18 February 1985. Later, this was upgraded as a Forward Ordnance Depot under the command of Capt DP Dissanayake and Lt(QM) S Narangoda acted as the 2IC. Then it was shifted to present location as ABOD on 1 November 1989. Capt P Ravindran was appointed as the 1st officer commanding of the FOD. Was upgraded as 2 DOU on 26 Feb 1991 to cater Ord support to the camps located in Jaffna, Mannar, Mullaitivu, Batticaloa, Polonnaruwa, Anuradhapura and Wanni area.Then Lt Col ML Jayaratne ato was appointed as the first Commanding Officer and had contributed immensely to provide Ordnance support for Operations 'Asaka sena,Akunu pahara, Thrivida balaya, Balawegaya, Haye Pahara', Wanni Wickrama 1,2,3,4,5, Edibala and etc.

At that time Forward Ordnance Depots (Wanni, Mannar, Jaffna) were under the Command of 2 DOU while MT I & II stores were under OSS Saliyapura.

The under mentioned FODs/OSS functioned under the 2 DOU to support mil estb located in north and north central for operational and logistic matters.

Lt Col BPHS Mendis SLAOC assumed duties as the 4th Commanding Officer on 13 February 1997 and this Unit was upgraded as the 2 Regt SLAOC by ARO/42/97 dated 19 Feb 1997. After the Operation Rivi Rasa, adm and tech responsibilities of the Forward Ordnance Depots of JFN, EPS and OSS (PLY) were taken away from this Unit and assigned under the OC Tps SLAOC KKS. 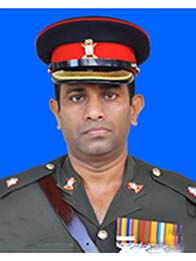 This regiment had been tasked to provide demonstration of DAA and BAA for DSCSC Student Officers at Omanthai at time to time. Under the supervision of then Commanding Officer of the 2 Regt SLAOC Maj HMUB Herath RSP AATO Lsc. A holiday bunglow was constructed inside the camp premises.

While contributing towards operational duties, welfare of the soldiers was also looked into. Number of welfare and development activities were initiated by Lt Col HL Guruge AATO. Some of them are as follows.

The 2 Regt SLAOC has provided its active contribution for a span of three decades in all the operations in the Wanni operational area with 3 Forward Ordnance Depots and one Store Section.

This Regiment has immensely contributed in providing Ordnance stores at the last phases of the Eastern and Wanni Humanitarian operations.