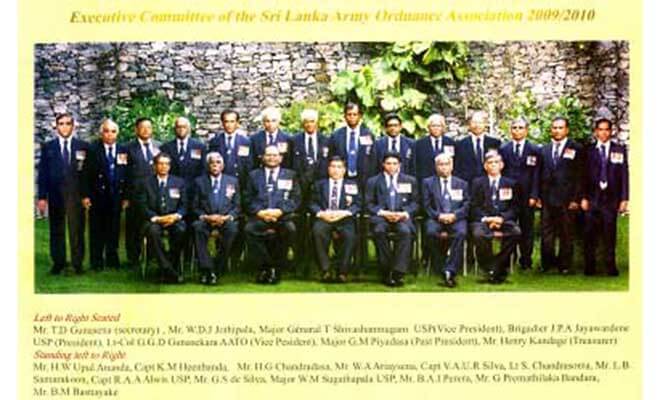 Though there is no written evidence on the establishment of an Ex-Servicemen's Association, initial discussions had taken place in this regard at the residence of Lt Colonel D F T Abeysinghe (Retd) in the 1978 at 35/1, Wijerama Street, Colombo - 03

During this period, the then acting commanding officer of SLAOC, Maj T Sivashanmugam called for a meeting to discuss the establishment of an ex-servicemen's association at the auditorium of the Sri Lanka Ex-servicemen's Association, Bristol Street, Colombo 01 on 24 February 1979.

In this meeting, Col D F T Abeysinghe was unanimously selected as the first President of the SLAOC Ex-servicemen's Association.
Captain S Wignaraja and Captain D P Baddewithana were selected as the Secretary and the Treasurer respectively.

Those who have served the Ceylon Ordnance Corps and Sri Lanka Army Ordnance Corps (Regular or Voluntary) are eligible to obtain the membership of the Association.

Presidents of the Association

Secretaries of the Association

Treasurers of the Association

A death donation association was established according to a proposal made by the Association's then President A A D B Perera on 27 May 1984. The donation which started with Rs. 2,000 has been increased to Rs. 25,000. Up to now, a total amount of Rs. 520,000 has been granted towards 52 funerals of members

In its Annual General Meeting held on 28 February 1999, the Associaition's name has been amended as 'Sri Lanka Army Ordanance Corp Association' (SLAOCA)

In the year 2000, a bi-annual newsletter titled 'Thunder' was launched by the then president of the Association, Deshakeerthi G M Piyadasa.
Its first issue was distributed among its members at its annual general meeting held on 28 February 2000. Its 25th issue was released in January 2012. A number of fund raising activities such as stage dramas and musical shows organized towards the welfare of its membrs

The Silver Jubilee of the Association was celebrated on 23 October 2004. As part of it, a photography Exhibition was organized by Brigadier J P A Jayawardhana USP in November 2004

The thirtieth-year anniversary celebration of the Association was held on 12 September 2009 and as part of it, an eye clinic was held and a total number of 31 spectacles were distributed among the Association's members

President's Award - the following members have been awarded the 'Desha Keerthi' president's award, the first ever honourary award ceremony organized by the Pensions Department, on 05 October 2007

In 2008, an amount of Rs.15 lakhs and a 2 acre plot of land adjoining the Dombagoda Regimental Headquarters was gifted by the then Commander of the Army for the construction of the SLAOCA office. The SLAOCA office was declared open on 21 February 2010

A proposal to establish a communication centre, Tailoring shop, and a shoe reparing centre and a plantataion of cinnamon in 2 acres is underway. The income generated through these will be used for the welfare of the members