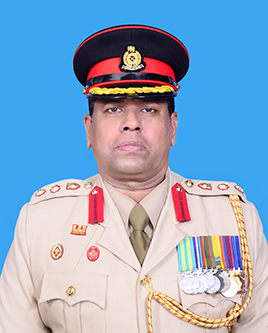 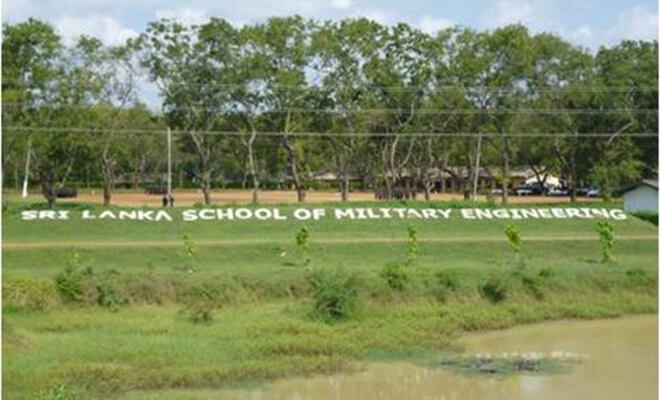 The Sri Lanka School of Military Engineering (SLSME) of the Corps of Sri Lanka Engineers is situated at the water's edge of ChandrikaWewa at Tunkama, Embilipitiya. It was declared open at this location by the then Commander of the Army, Lieutenant General H Wanasinghe VSV USP ndc on 18 August 1989.

The Royal Engineer Officer Major AJ Hacker RE was one of the four Officers of the British Army who were seconded to serve in the Ceylon Army in the late 1950s undera programme of training assistance. Major AJ Hacker was assigned to establish a Ceylon School of Military Engineering (CSME). Unfortunately, he had met with his untimely death in an air crash along with Warrant Officer II Fernando GA CE and a few of the NCOs who were earmarked as Instructors of the proposed school. Within the premises of the school, stand the plaque erected in memory of Major AJ Hacker RE and Warrant Officer II Fernando GA CE. Originally, this plaque was at the Ceylon School of Military Engineering at Konduwattuwana Army Camp in Ampara.

The School of Military Engineering was formally established at Konduwattuwana Army camp in April 1958 as a sub unit of 1 Field Engineer Squadron, Ceylon Engineers. It was ceremonially declared open by Brigadier AM Muttukumaru OBE ED, the then Commander of the Army On 6 May 1958. The first Officer Commanding of the School was Captain BGS De Silva CE. In 1979, the school was moved to Plantain Point, Trincomalee from where it was shifted to its present location in 1989.

The reorganization of the Army brought the SLSME to function as a separate institute of the Corps of Sri Lanka Engineers and the head of designated as the Commandant.

To be the premier combat Engineer Training Institution in Sri Lanka with international recognition facilitating the professional growth of all officers and men of the Corps of Engineering in combat Engineering and selected officers and men from all arms, The Navy , Air Force and Police in selected combat engineering skills to meet all current and future combat engineer requirement of the Sri Lanka Army and other defence services.

The objectives of the Sri Lanka School of Military Engineers are as follows:

a. To provide facilities for courses of study and instructions for branches of learning related to field engineering, plant engineering and humanitarian demining.
b. To identify and acquire knowledge in combat engineer tasks covering the full spectrum of conflict.
c. To develop skills pertaining to execution of combat engineer task under different combat environments.
d. To understand the principals of the employment of combat engineers and be able to advice commanders on the same.
e. To develop the capability of research and analysis to provide effective combat engineer support for military operations.
f. To assist schools, universities, government institution, cooperations in development of leadership traits, management and social skills.
g. To exercise such other functions as the institution may consider necessary for the achievement of its objectives. 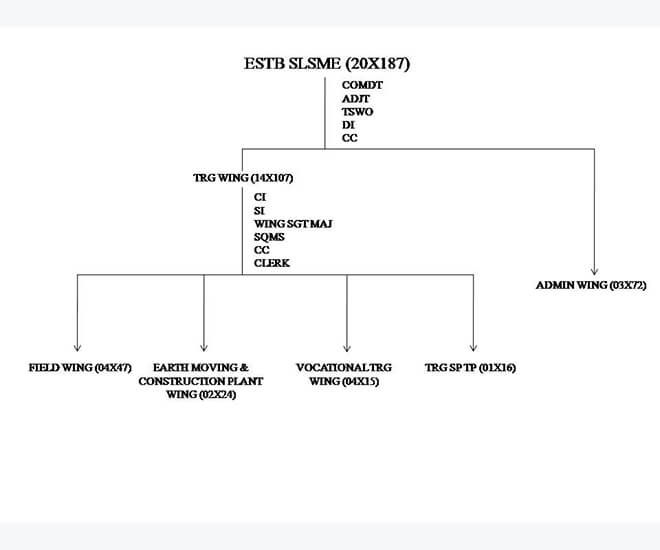 Field engineer courses are conducted at three different levels at this school. Sappers who have completed six months of service in the field are qualified to follow the Class III course and it is compulsory for everyone to follow this course irrespective of their trade. It is mandatory for all soldiers who are in the trade of field engineer to undergo all three courses as per their seniority. Field engineering, bridging, mines, road construction and theory of explosives are taught in these courses.

Engineer soldiers who are qualified in field engineering class II course and obtained more than 50% of marks from the course are eligible to follow the BD course. Theory of explosives, demolitions, phases of bomb disposal, safety precautions, IED disposal and various types of equipments related to BD and IEDs are taught in this course.

Three types of plant operator courses are conducted at the school. Sappers who have completed six months of service in the field are qualified to undergo these courses and it is mandatory for all those who are in the trade of plant operator. All categories of earth moving machines, their capabilities, functions, and maintenance and minor repairs are taught in these courses.

This course is specially designed for soldiers of other arms specially the Infantry to train them on basic field engineer tasks. Soldiers who are nominated from other regiments through Directorate of Training undergo this training. Basic field engineering, mine fields, mines and explosive theory are taught in this course.

This is an all arms course and soldiers who are nominated from the respective regiments can undergo this course. Boat riding, preparing rafts, swimming and areas related to improvised water crossing are taught in the course.

This is an all arms course and soldiers who are nominated from the respective regiments can undergo this course. Boat riding, preparing rafts, swimming and areas related to improvised water crossing are taught in the course. Army recruits enlisted by the Army Headquarters to fulfill the vacancies in various regiments are also trained at SLSME. The course of training is similar to that of other recruit training centers.

Depending on the requirement of the Corps of Engineers and the Army, various types of other courses are also conducted at this school: 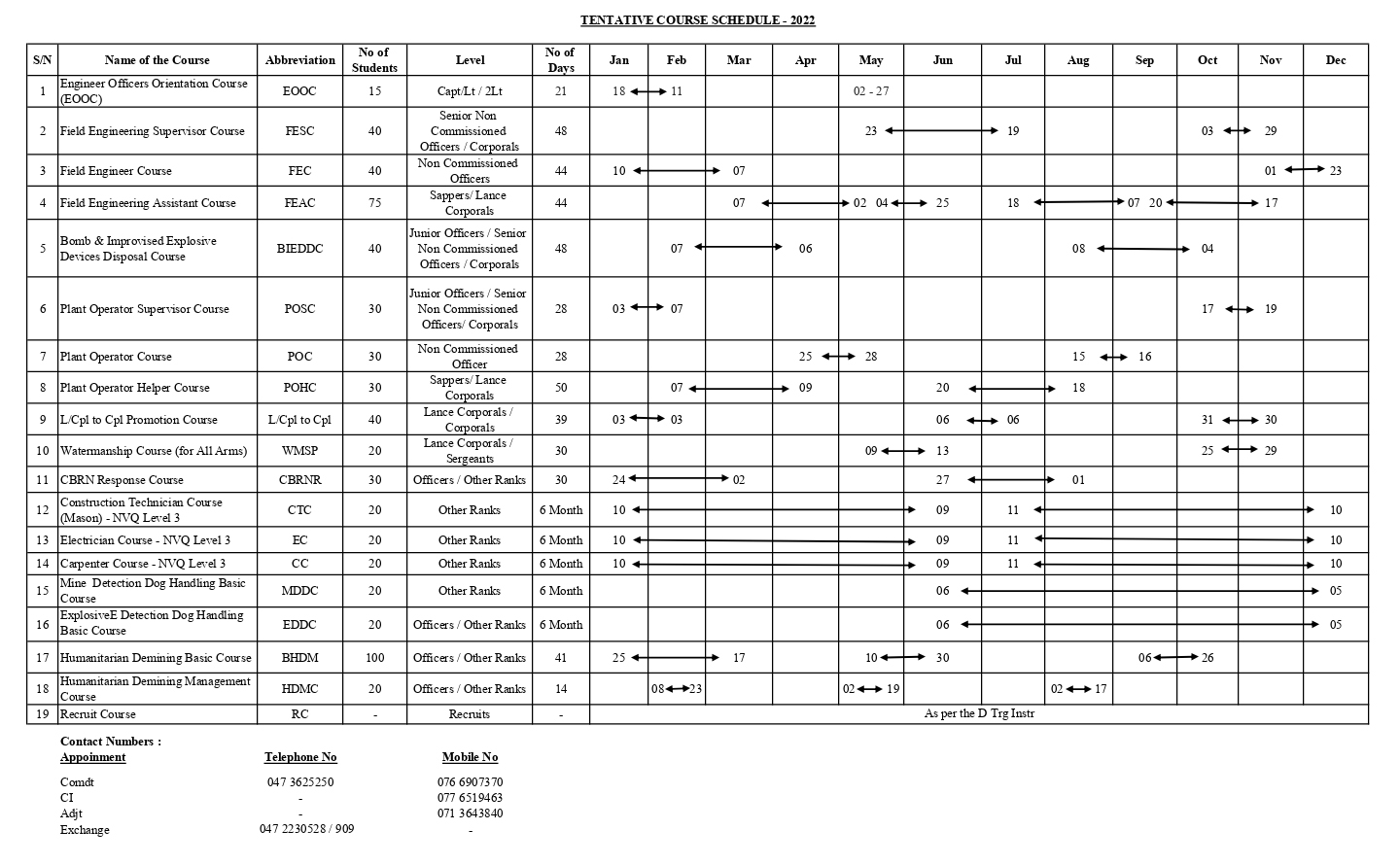