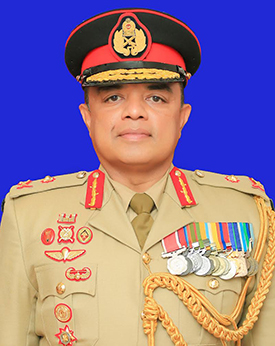 Major General Lanka Amarapala was born in Colombo on 23 June 1970. He studied at Dharmapala Junior/Dharmapala College, Pannipitiya from 1977 to 1989 and excelled in sports such as cricket, athletics, swimming and karate. He was enlisted to the Sri Lanka Army on 20 January 1989 as an Officer Cadet. On completion of military training at Sri Lanka Military Academy, Diyatalawa and the Indian Military Academy, Dehradun, he was commissioned as a Second Lieutenant.

Major General Lanka Amarapala first held the appointment as a Platoon Commander in 1st Battalion of the Gajaba Infantry Regiment and was deployed in Counter Terrorist Operations in the North and East of Sri Lanka. Thereafter, he joined the Corps of Sri Lanka Engineers. As an Infantry and Combat Engineer Officer, he participated in the majority of the military operations conducted in Sri Lanka, holding different responsibilities in various appointments and ranks. He has a long service experience in the fields of Counter Terrorist Operations and Counter Insurgency Operations. Major General Lanka Amarapala commanded the 10th Field Engineer Regiment in an infantry role for two years, 2009 and 2010 in Jaffna, and the 6th Field Engineer Regiment in Kilinochchi and Wanni during the post-war nation building phase. Thereafter, he was appointed as a Directing Staff at the most prestigious Command and Staff College in Sri Lanka.

The Senior Officer has successfully followed the undermentioned local and overseas courses in different stages during his illustrious military career.

Major General Amarapala holds a Master’s Degree in National Security Administration (MNSA) from the National Defence College of the Philippines and a Master’s Degree in Defence Studies (Management) from Defence University-Sri Lanka. He has successfully followed the Command & Staff College Course (psc), holds a National Diploma in Human Resource Management from the Institute of Personnel Management (SL), and holds Post Graduate Diplomas in International Relations (PGD in IR) from the Bandaranaike Centre for International Studies (SL), and Managing Olympic Sport Organizations (MOSO) from the National Olympic Committee (SL). He is recognized as a Senior Certified Professional by the International Public Management Association for Human Resources in the USA (IPMA-SCP). He is also a member of the Sri Lanka Institute of Training and Development (SLITAD).

Major General Lanka Amarapala is the first ever Sri Lankan to secure prestigious academic excellence in the National Defence College of the Philippines, bagging two medals (Gold & Bronze). He was awarded both the Gold Medal for the Best Thesis and the Bronze Medal for Academic Excellence in the Masters’ Course (National Security Administration Regular Course-56 2020/2021). Apart from that, having considered the recognition of his outstanding achievements in the fields of national security, development and performance, Major General Lanka Amarapala was awarded the Outstanding Alumnus Award for 2022 by the National Defence College of the Philippines and NDCP Alumni Association Inc.

For his bravery demonstrated in the face of the enemy during Counter Terrorist Operations against the Liberation Tigers of Tamil Eelam (LTTE), he was awarded the RANA WICKRAMA and RANA SURA GALLANTRY MEDALS. He has also received United Nations, Foreign Service, and almost all military campaign and service medals.

He is married to Surangi, blessed with a daughter and a son, Tanuli and Virul.