THE CHRONICLE OF THE GLORIOUS GAJABA REGIMENT

Of all the ancient cities of Sri Lanka, the most famed and most exquisite is the Kingdom of Anuradhapura. It is the Sri Lanka’s third and the longest serving capital and one of the most sacred cities of World Buddhists with the blessings of Jaya shri Maha Bodhi and Swarnamalee pagoda. The city of Saliyapura is the home for Gajaba regiment troops and it is 10 km away from the city of Anuradhapura. Gajaba Regimental Centre is established at Saliyapura and it is popularly called as "Gajaba Niwahana".

The Construction works of Gajaba Regimental Centre at Saliyapura was started in the year 1980 on a plot of 100 acre land in extent. Initial deployment of troops for new camp was a group of thirty men or in other words a platoon level strength with S/25064 Warrant Officer, II Rambukwella G. Since then, credited to untiring commitment of Gajaba Regimental officers and men and the leaders they have been guided "Gajaba Niwahana" at Saliyapura is now a fully fledged Army cantonment with all the state of arts.

The 1st Battalion of Vijayabahu Infantry Regiment was established on 15th March 1981 as the newest regiment in Sri Lanka Army and the new regiment took its deployment at the Irattaperiyakulam camp in Vauniva. Lieutenant Colonel TRT Jayathunga who was then a Sri Lanka Singha (SLSR) Regiment Officer, was taken in to the new regiment and appointed as the 1st Commanding Officer. The 3rd Battalion of Rajarata Rifles also saw its birth as a volunteer battalion and established at Minneriya Army Camp on 26th August 1981. Major KB Warnasooriya was appointed as its 1st Commanding Officer. Later, according to a decision taken by the Army Headquarters in early February 1982, the 1st Vijayabahu Regiment was allowed to be stationed in Minneriya camp, 3rd Battalion (V) of the Rajarata Rifle was amalgamated with the 2nd Battalion (V) of the Rajarata Rifles, and 2nd and 3rd Battalion of the Rajarata Rifles evolved as a single battalion. A contingent of troops from the 1st Battalion of the Rajarata Rifles was deployed for the security arrangement planned for election duties in Jaffna in the year 1983. While performing duties there, a terrorists attack was attempted against the troops placed on security duties at the Kandarmadam polling station. As a result S/45478 Jayawardana JSS lost his life and he entered to the history as the 1st solider of the Rajarata Rifles died in a terrorist attack. However, soon after this incident, disruptive behaviors of some soldiers were reported and it led to cease their duties and brought them back to Saliyapura camp.

Army summoned an immediate inquiry into the indiscipline behavior of that group of soldiers and accordingly the services of three Non-Commissioned officers were suspended. Responding negatively to the Army's ruling, another set of soldiers left the services. At that point of time Lieutenant Colonel LDCE Waidyarathna psc who was from Sri Lanka Armoured Corps, took over duties as the new Commanding Officer 1st battalion of the Rajarata Rifles at Saliyapura. Few days after his appointment, the troops of the battalion were made to report to volunteer battalion training camp in Diyatalawa for collective training. 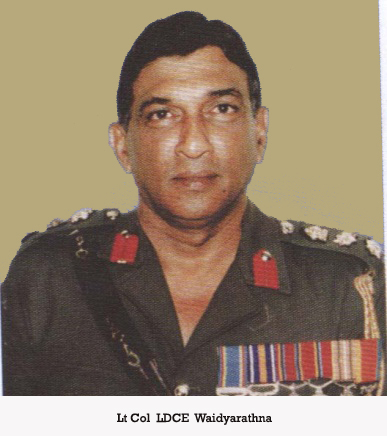 After the collective training, troops of the 1st battalion of the Rajarata Rifles were brought to Colombo and deployed there in order to counter the ethnic riots erupted in July1983. Later, this battalion was recalled to Saliyapura from Colombo. By this time, the Sri Lanka Army was gearing to counter numerous anti-terrorist threats which were being accelerated in a manner that they had never faced before.

According to the decision taken by Army Headquarters 1st Battalion of the Rajarata Rifles and the 1st Battalion of Vijayabahu Infantry Regiment were amalgamated as the new infantry unit called "Nawa Pabala Ekakaya". This new regiment filled with required man power to take charge with a bigger role in establishing the law and order in the Country.

Naming the new infantry regiment as "Gajaba Regiment" is interesting to note. By then, it had already been established in Anuradhapura, the home for many warrior kings find in the Sri Lankan history. The New Regiment on the other hand was also a warrior unit in design and so required a name that could depict heroic posture, valour and courage to suit the officers and soldiers in the unit and groom them in the same manner.

The name of heroic king "Gajabahu" was the first to propose and it was acknowledged. "GAJABA" means strong arms of elephants in literary Sinhalese.

"Unity is the strength" or "Samagiya Shakthiyai" is the motto of the Gajaba Regiment. According to a concept of its 1st Commanding Officer a new cap badge which includes artistic images of two hatchets crossed each other in the centre shielded in medical horns of king Gajaba was designed. It was ceremonially awarded to officers and men in a colourful ceremony held at Saliyapura camp on 13th March1984.

Gajaba Regiment (GR) of the Sri Lanka Army goes in the annals of Sri Lankan contemporary military history as the Regiment which produced the majority of Wanni battlefield Commanders who led a successful battle to wipe out LTTE terrorism from the country. In the post conflict scenario, GR troops have also been contributing largely to the development and peaceful co-existence of the country. Currently the Regiment consists with 16 Regular Units and 8 Volunteer Units, with a total of 24 battalions.

Gajaba Regiment of the Sri Lanka Army saw its birth in time a decisive era when the country needed young brilliant officers and men needed to carry arms with courage, dedication, and commitment with a clear sense of discipline and professionalism.