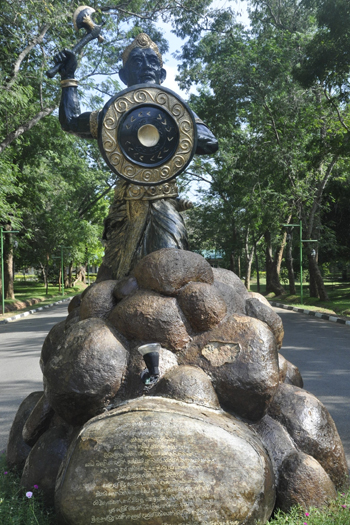 The Gajaba Regiment was named after a Sri Lankan great warrior king GAJABAHU THE FIRST. The name of King Gajabahu the first, Who was a highly belligerent warrior in the history of sri lanka which meant the one who had arms as strong as an elephant. Chronicles of King Gajabahu, creating strength and morale required for soldiers to approach the victories. King Gajabahu was lead many battles to the victories. Even he was able to invasion the south India and marked remarkable point in history.

The Regiment flag is consist with three colours. 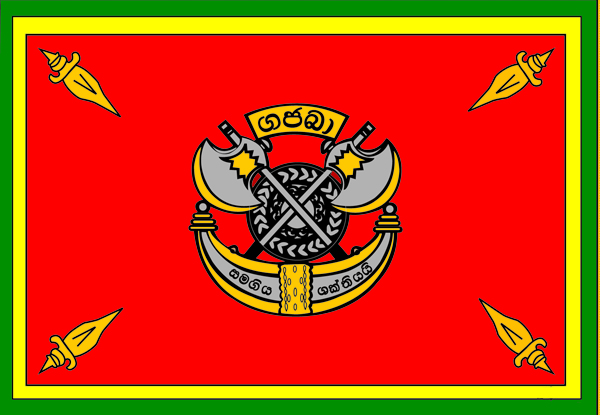 A mixture of ancient military prowess is depicted in the regiment flag. The gold and green colours bordering it and the flag is mainly red in colour. The gold and silver crest is centered and four spearheads in the four corners representing the security.

RedThis colour has signified the victory since the ancient years. Hence the prominence given to it in the flag.

GoldThis colour symbolizes the unity and prosperity of the ancient kings. From the days of King Dutugemunu, red and gold colours have been considered as the colours of Rajarata.

GreenThis colour is the colour of prosperity. It depicts the prosperity of the paddy fields of the Rajarata area and their present well being.

Our regiment crest has a prestigious history of its own. The regiment crest has been designed the unique character of the establishment. It depicts the weapons used during King Gajabahu. The crest consists a shield in the background which is artistically carved and two crossed hand axes resting on a pair of medicine horns.