The Secretary to the Ministry of Defence Major General (Rtd) Kamal Gunaratne WWV RWP RSP USP ndc psc Mphil, paid his maiden visit to Home of Gajaba Saliyapura as the Second Keteriyan member to hold the appointment of Secretary to the Ministry of Defence. The Chief of Defence Staff and Commander of the Army, Colonel of the Regiment Gajaba Regiment and Special Forces Lieutenant General Shavendra Silva WWV RWP RSP VSV USP ndc psc, was warmly received the day’s Chief Guest as an Conformity of Proud Keteriyans.

The Mesmerizing event was commenced with Paid tribute to the Statue of 'Father of the Gajaba Regiment' late Major General Vijaya Wimalaratne, then Guard Turnout and Guard of Honour by Gajaba troops with its proud Regimental mascot Colors, presented as a honour to the Chief Guest, Planting of Sapling, group photograph and opening of “KETERIYANS PIER”.

Later, Secretary to the Ministry of Defence address to a representative gathering of Rtd Senior Officers and Council Members and Senior officers inclusive of exchange of memories.

The day was coloured with scholarship awarding ceramony. Gajaba Seva Vanitha Unit has offered 50 scholarships for the students who were belong to Gajaba Families. The Commander of the Army has presented a token of appreciation to day’s Chief Guest on behalf of all Ranks in Gajaba Regiment.

Past Colonel of the Regiments and all Veterans Keteriyans were presented with their spouses to witnesses this glamorous ceremony, Including the Deputy Chief of Staff Major General Nirmal Dharmaratne and Council members, Senior Officers, Centre Commandant RHQ GR, Staff Officers, all Commanding Officers and number of Officers, Other Ranks and Parents also were presided for the mesmerizing occasion. 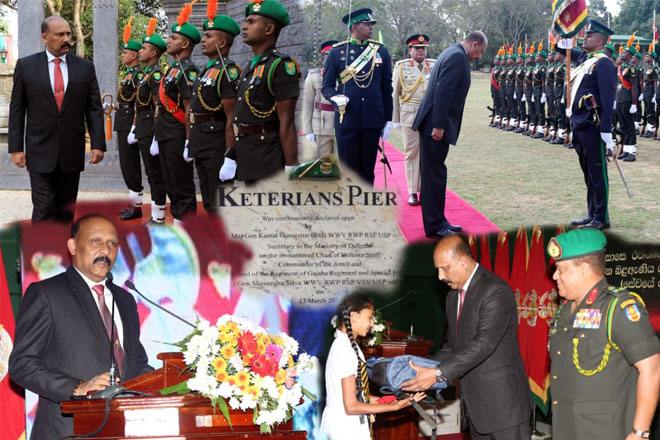