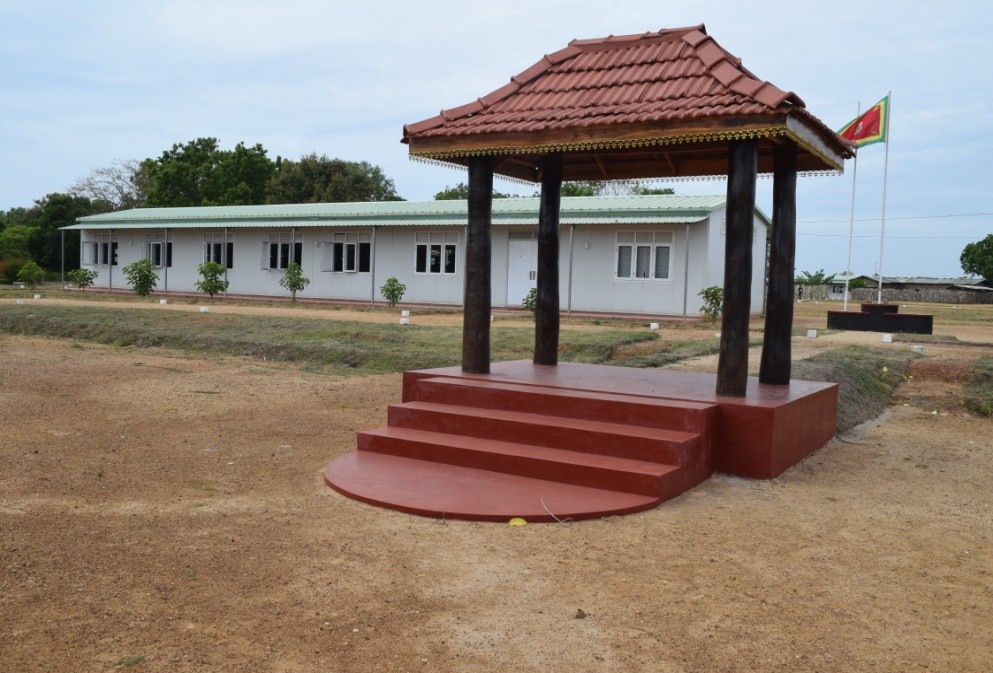 It was celebrated the birth of 6th battalion the gajaba regiment at an auspicious time on 17th may 1990 at Gajaba Niwahana in Saliyapura, Anuradhapura with the intention of safeguard the country’s territorial integrity and the sovereignty during the period of prevailing the brutal terrorism in the island. For strengthening the newly established Battalion, it was contributed the man power and the other basic requirements by the regular Battalions of 1st, 3rd and 4th which had already been established by the time.

In August 1990 The Battalion was placed at Trincomalee, Topuoor, Serunuwara areas separately. Subsequently in September 1990 the Battalion moved to Mandathive to help in operation “Trivida Balaya” which was conducted to liberate Jaffna Fort from terrorists. After that operation this Battalion joined in operation “Jayasakthi” in Palali, kadduwan, Kankasanthurei areas. .

In June 1993, this Unit vacated the Forward Defence Line in Iyakachchi and was located in the Kayts and Mandaitivu islands, and Rifle Companies of the Unit were deployed separately in the Kayts islands.

In September 1995, the Unit handed over its duties in the island of Mandaitivu to the 10th Battalion, Gajaba Regiment and was relocated in the kayts area.

Major DNSK Senadeera WWV RWP RSP who functioned as the Second in Command of the unit until then, handed over duties of  his appointment to Maj DSHRN Fernando RSP on 25th January 1996 at the Meesalai camp.

After Operation Riviresa, on 25th October 1996 this Unit came to the Batticaloa area and was located with its Head Quarters at Sittandi camp and all the rifle companies in the Sandiveli, Mavedivembu, Kaluwankerni and Vavunativu areas.

Lieutenant Colonel GDHK Gunarathne RWP RSP Psc who rendered an immortal service sharpening the fighting spirit and other fields, including sports of the Battalion, making indelible marks in the battle field against the terrorists by operating the Battalion very proficiently, bringing prestige in particular to the Gajaba Regiment and in general to the entire Sri Lanka Army, who commanded the Battalion for a continuous period of over three years, handed over his nervous duties to the newly appointed Commanding Officer Major CP Gallage RWP RSP on 06th June 1997 at the Sittandi Camp.

The Commanding Officer of this Unit, Major CP Gallge RWP RSP was promoted to the rank of Lieutenant Colonel, and on 24th September of that year, the Second in Command of the Unit, Major HHRN Fernando RSP, handed over his duties to Major SADNJ Suraweera RSP.

Subsequently, this Battalion came to the Wanni area and joined the Air Mobile Brigade for Operation jayasikiru. Later, after securing the puliyankulama area, the Battalion Head Quarters and all Companies Were located in that area,

Lieutenant Colonel CP Gallage RSP, the Commanding Officer of the 6th Battalion, who successfully led it to acquire victories in battle by inflicting heavy defeats on the terrorists and bringing destruction on enemy strongholds through Operation jayasikuru, who by utilizing the battle skills of the Unit troops very effectively, giving them the correct leadership and leading them very proficiently in attack by promptly identifying the enemy ‘s weak points, and experienced in strategy and being an outstanding Officer in the entire Army, handed over his onerous duties to Major DMS Dissanayaka WWV RWP RSP on 22nd April 1999 in the Omanthai area.

Major DMS Dissanayaka WWV RWP RSP, who Functioned as the fourth commanding Officer of the Unit Who moved closely with troops to regain their morale when then their morale had fallen to some extent during certain periods of the war, and who had a clever understanding about leading his troops very skillfully from the battle front, who very proficiently and very effectively performed his duties under command to the Ari Mobile Brigade for three years, handed over his duties to Major KHC Kumarasinghe RWP RSP,wha had been appointed as the new Commanding Officer, on 03rdjune 2002 at the Sarasalia camp.

On 14th December 2002, after completing Battalion training, all ranks were located in the WeliOya area for operational duties, and on 29th January 2003, came to the  JaffnaKillali area.

As during this period, the Government and the LTTE had signed the cease fire agreement, the Unit was located in Kankesanthurai in the Security Forces (Jaffna) area on 02nd March 2004 as a Reinforcement/Reserve Battalion.

Major KHC Kumarasinghe RWP RSP, who had been the Commanding Officer of this Unit, left the Unit for  a brief period to follow the Psc course and the duties of that appointment were looked after by Major WRM Rathnayake RWP who functioned as the Second in Command.

While the Commanding Officer of the Unit returned having finished his course, on 05th May 2005, all troops vacated Kankensanthurai and were deployed for the security of the Jaffna town, which came under area of responsibility of the 51 Division

Major KHC Kumarasinghe RWP RSP Psc, who gave priority to operational duties as well as to the welfare activities of the troops of this Unit handed over  duties to Major WMJRK Senaratne, who took over as the newly appointed Commanding Officer on 10th June 2005 at the Ariyalai camp at an auspicious time.

Major WMJRK Senarathe was promoted to the rank of Lieutenant Colonel. On 26th September 2005, all ranks of the Unit vacated duties in the Ariyalai area and were located in the general area of Nagarkovil, Killali and Muhamali.

Lieutenant Colonel WMJRK Senaratne, who acted with great restraint even during very strained circumstances in battle, as the Commanding Officer of the 6th Battalion, Gajaba Regiment who led battles very skillfully against the third Eelam war of the terrorists and who rendered a major service in respect of the well being and welfare of the Officers and Other Ranks of the Unit, handed over on 14th December 2007 his  responsibilities and duties to Major WRM Rathnayaka RWP who had been appointed as the new Commanding Officer.

This Battalion which was deployed for duties in the Killali area from 21st December 2007 to 18th January 2008, was engaged in providing protection to the island of Kayts, as well as conducting group exercises there form 19thJanuary 2008 to 30th April 2008. With the completion of training there, troops of this Unit returned to Kilalli and were engaged in operational duties.

Having victoriously concluded the Northern Humanitarian Operation, troops of the Battalion came to the Kilinochchi area again on 03.06.2009 subsequently on 04.06.2009, the Battalion come to the Olumadu area and was located there.

On 17.09.2009 the battalion was relieved of operational duties and came to the Race Course, Colombo for VIP protection duties. Here Senior Office Major WRMM Rathnayake RWP,the Commanding Officer who shouldered an outstanding mission during the Northern Humanitarian Operation, on 06.11.2009 handed over the duties of the Commanding Officer to Senior Officer Major JMNK Jayasundara  on 27.02.2010 at Broodi House, Colombo 07.

Then Bn shifted to Valachchanai and located in Navaladi junction under command to 233 Bde and 23 Div Lt Col GAT Godewatte handed over his duties as commanding officer on 10.02.2016 at Navaladi camp to Maj SW Arachchige who has been appointed as the new commanding officer of the 6th Battalion the Gajaba Regiment up to now.

The Officers and other servicemen who performed their duties with heart and soul to liberate the mother land from 30 year long war were decorated with medals for their bravery with 21 Weera Wickarama medals, 150 RanaVickrama Meadals and 422 Rana Soora Medals.