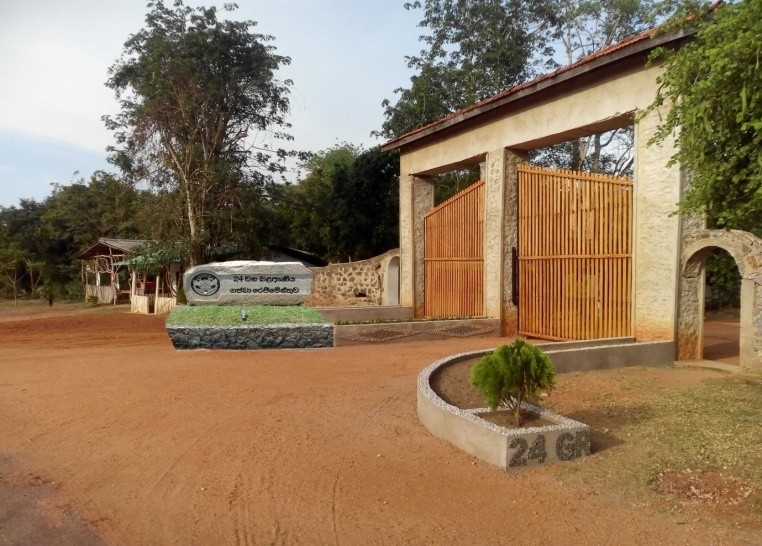 24th Battalion of the Gajaba Regiment was inaugurated according to the instruction of ARO 86/2009 of Sri Lankan Army on the 18th October 2009 as a new member to the Gajaba family at Regimental headhunters Saliyapura Anuradhapura. With the aim of strengthening the military force and to take up the responsibility of rehabilitation and relocation of the Sinhala, Tamil and Muslim victims who were internally displaced and evacuated by the humanitarian operations conducted in the North and Eastern regions by SL Armed forces.

When the inauguration of the Battalion took place at Saliyapura, Anuradhapura the proud Ketterians home the first Commanding Officer was O/62099 Major DUN Serasingha RSP, and O/64004 Major SW Arachchige was appointed as the Second In Command. The Battalion consisted of the strength of 08x495 with fellow regimental members from brother battalions and recruits who joined the battalion newly at its inauguration.

When nominating key appointment holders of the battalion under mentioned officers and other rankers were fortunate enough to record its first. As an Adjutant O/66873 2/Lt RAEN Fernando RSP, as a Regiment Sergeant Major S/450727 WO1 WG Premarathna, as a Chief Clerk S/453312 C/Sgt Jayathissa M were appointed on 22nd October 2009. Then the Battalion was shifted to Naddankandal in Mullative district under command to 612 Bde to continue the rehabilitation and relocation tasks which was entrusted to SL Army on 31st October 2009. Areas of Responsibility were the general area Pandiyankulam, Selvapuram, Panankamam and Karanpuliyamkulam.

With the instruction of 61 Division battalion had to shift to the Sacred Madhu church area in Mannar district under 613 Bde on 05.03.2012  after handed over the previous place to 33 SLNG. Since then battalion is well performing in the area covering 198 KM2 providing security in the area and helping civil authorities in natural calamities. Mainly assist to famous Madhu church when there is a priest and who are coming to witness it.