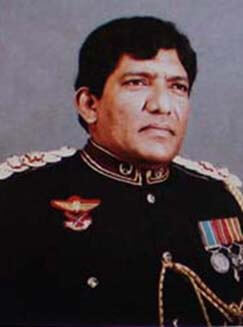 In accordance with the progress achieved by the Sri Lanka Army and incompliance with the various requirement that arose in our country. It became extremely necessary during the year 1977 to form a special unit in the army. With the good graces of the unstinted support giving to this necessity by the then commander of the Army Lt Gen JED Perera ndc psc, it was decided at a conference held through his leader ship to form a special unit comprising there officers and three other rankers in an advisory capacity before the end of the year. In This regard arrangements were made to provide a special commando training course on 09th February 1978. The initial commando training course was held at Diyatalawa Ella Army camp. In this regards 6 officers and 24 other rankers comprising from Armour, Artillery, Engineers, Infantry drawn from Light infantry, Gamunu watch and Singhe Regiment of the Sri Lanka Army participated. Those who voluntarily participated and successfully completed the training course. Came from different units of the Army who completed the second course and were selected as instructors were return to their respective regiments.

On 15th March 1980 as per instruction received from the Sri Lanka Army Head Quarters the Commando Squadron was formed, and was installed at Diyatalawa B camp. Major SD Peiris was appointed as the officer commanding of this squadron.

Thereafter, some officers and other rankers of the squadron under the responsibility and guidance of the regiment underwent a course of training conducted by British instructors. (SAS) In Anti - Hijacking and Hostage Release operations. In addition to this some of the commandos who had undergone an Airborne course at the Indian Air force training school, Displayed their capabilities at an air display at Rathmalana Airport on para jumping on the Army day held on 10th October 1980.

On 4th December 1980 the commando Squadron was established at Ganemulla. By 1981 midyear when the construction of the first stage of the camp had been accomplished. And the building was officially opened by then Hon. Deputy Minister of Defense TB Werapitiya. Thereafter stage by stage completion of the camp went on progressively, and as result on 15th March 1984 the officers Mess was ceremonially declared opened by Lt Gen Weeratunga, then Commander of the Army. 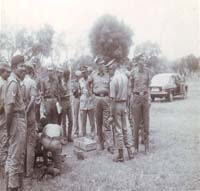 The commandos, were thus engaged on operational duties in North and East, and also played a major role in the Vadamarachchi operation. In addition, the commandos were engaged in small team operation. And other special operational tasks during this period. Commandos were engaged in VIP protection duties, and those who had received training in Anti - Hijacking and Hostage releasing, were placed at the bandaranayaka international Air - Port at Katunayaka.

On 15th March 1986 CQB Hut was declared opened, by then Hon. Minister of Defense Lalith Atulathmudali, for the use of Anti - Hijacking and Hostage release training purpose. 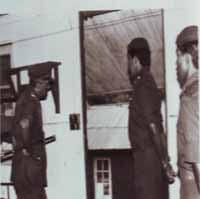 On 15th March 1988 a Cammando Training School was opened. In order to give more impetus to the commandos to carry out their duties more progressively and successfully.

During this time, independent brigade was formed and thus the Commando Regiment became a part of the Independent Brigade.

In the year 1990 for the first time the commando instructor team conducted a parachute training course, the graduation parade was held on 21st February 1990. On 15th March 1991 a well equipped building, for para training was opened at Ganemulla camp. 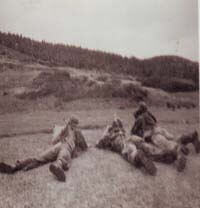 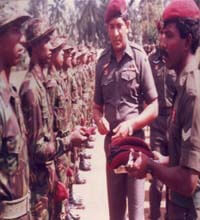 In the year 1990 for the first time the commando instructor team conducted a parachute training course, the graduation parade was held on 21st February 1990 On 15th March 1991 a well equipped building, for para training was opened at Ganemulla camp.

On 1st May 1991 the Commanding Officer, Lt Col Hadapangoda, Left the service and Lt Col PP Fernando psc was appointed as Commanding Officer. During this period on account of the successful operation performed by the commandos in the east jungles such as Thriconamadu, Thoppigala, Angodavilluwa, Welioya and also operation conducted in the north (pooneryn and Vettikerni) were conducted quit successfully.

In the event of the Commanding officer 1st Commando Regiment Lt Col PP Fernando psc being assigned a hire appointment and Lt Col SM De Rajapaksha was appointed as the Officiating Commanding Officer of the 1st Commando Regiment with effect from 10th March 1994. During this period on account of the successful operations performed by the Regiment in the East jungle such as Thriconamadu, Thoppigala, Angodavilluwa.

During this period 1st Commando Regiment was engaged in small group operations in the Batticolo area and some were at Poonarin protecting the Poonarin Camp. The 2nd Commando Regiment participated on operational duties on “ Operation Rivirasa I “ in the Jaffna area. On major operation such as “ Rivirasa II ”, “Shake Hand“ , “Sath jaya I,II,iii“ both the Regiments displayed their talent by participating in major roles at these operations.

At this period Colonel PP Fernanado RSP psc who was the centre Commandant of SF/Commando Regimental centre was assigned to higher headquarters and Lt Col Chandrawansa psc Msc handed over his post as the CO of 2nd Commando Regiment and took over the appointment as the Centre Commandant. At the same time Regimental Centre was shifted from Battaramulla to Ganemulla. During this period of time Independent Brigade was separated. And reestablish as Commando and SF Brigades. In this event Lt Col P Chandrawansa psc Msc was appointed as the first Brigade Commander of Commando Brigade.

During this period of time, the Commando Brigade on and off were engaged in small group operations and long range reconnaissance patrol, with the assistance of the Navy and Air force.

On 25th July 1998 Col P Chandrawansa RSP psc Msc handed over duties of the Commando Brigade to Col KANS Fernando RSP who was appointed as Commando Brigade Commander. It is worthy of mentioning, that the Commandos also participated in all stages of operation “ Jayasikuru “.

On 15th March 1999 with the approval of the Army Headquarters, Regimental Headquarter Battalion was opened, for the Welfare and well being of the injured and disabled Commandos. Maj BPS De Silva RSP was appointed as 1st Officiating CO of the RHQ Battalion.

During the end of 1998 Commando Brigade was stationed in the North (paranthan). It is noteworthy to mention at this point, that during the period of September 1999 the Commando Brigade displayed a major role in all emergency situations. On account of this, 1st Commando Regiment was shifted from Paranthan to Welioya. The trainees of the CRTS were also shifted to Welioya and Paranthan for OPS duties.

In conclusion, it is of paramount importance to state, that the Commandos serving in various capacities ad Officers or men of other ranks are a devoted and dedicated lot. On many accessions they have sacrificed their lives and limbs, for the cause of the nation and our people. Many have lost their sight for us in their prime of youth, despite all these toils, trials and tribulations. Our sympathies are due to all Commando who have lost their lives and also to those who are living to fight this battle until peace is brought to our motherland.