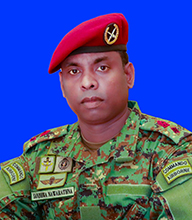 With the uprising of terrorism in the world in late 1970 there was a requirement of forming a special unit in Sri Lanka army who are capable of handling aircraft hijacks and hostage situations. With the direction of the Commander of the army Lt Gen JED Perera NDC psc, Cdo Sqn was formed on 15th March 1980. In late 1980's the British SAS instructors conducted a special Anti Hijack and Hostage Release course at CTS Ampara for officers and OR's of Cdo Sqn. With the rapid expansion of the Cdo Sqn was upgraded as 1st Commando Regiment on 1986. Later VIP Protection Duties and War Dog duties were assigned to the Commando Regiment. On 01st March 1993 the 2nd Commando Regiment was formed. Thereafter Anti Hijack and Hostage Release Team and War Dog teams under Commanded to the 1st Commando Regiment and VIP protection duties was assigned to 2 CR.

When we considered above 4th Commando Regiment it is consist with VIP and VVIP duties. This are the major events conducted by 4th Commando Regiment VIP Group in 25th April 2006 LTTE Seized attack to the Commander of the Army. During that time Commando VIP Group provided High security for the Commander of the Army. 14th August of 2006 LTTE Seized attack to the Ambassador of Pakistan in this occasion VIP Group provided security to the Ambassador. In 01st December 2006 in the incident occurred by Kollupitiya in that occasion LTTE seized Bomb blast to the secretary of defence. Apart from that 4th Commando Regiment is consist with following Groups.