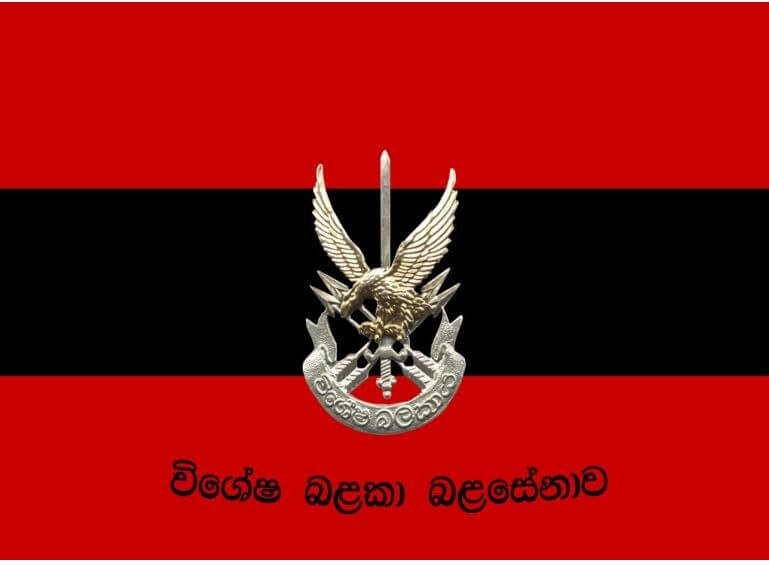 THE PROUD LEGACY OF THE SPECIAL FORCES BRIGADE

In the early 80s when the country’s sovereignty and territorial integrity came under threat from separatist terrorist forces, a need arose to have a special unit to face the challenge. Consequently, a small group of patriotic and highly skilled group of all volunteer soldiers numbering two officers and thirty – eight soldiers under the leadership of Major Gamini Hettiarachchi formed what was then known as ‘Combat Tracker Team’. Within a very short time, the small combat team instilled devastating fear and chaos upon the enemy forcing them to avoid contact whenever they realized that they were facing a determined and daring group of men. They wore black jungle fatigues and black hats. With expansion and more combat operations to their credit, the elite group of soldiers became known as the “Rapid Deployment Force”.

THE PROUD LEGACY OF THE SPECIAL FORCES BRIGADE

As at today the SF Brigade fully pledged with four fighting battalions as 1,2,3 and 4 SF with their additional special elements; namely a Combat Rider Squadron, a Combat Diver Squadron, two LRP Squadrons and a Urban Fighting Squadron respectively and with a Regimental Headquarter Battalion.

The Role of Special Force to conduct Unconventional Warfare and Special Operations across the full spectrum of military operations in both overt and covert.

Tasks of the Special Forces are as follows:

Sri Lanka Army Special Forces Regiment in its short span of thirty – three years has rendered yeoman service to the nation in safeguarding its sovereignty and territorial integrity. When Sri Lanka faced the threat of separation and disintegration, the regiment acted as the guardian angel of the nation. It fought with tenacity and courage sacrificing many lives of its members and receiving injuries to hundreds of others. Having started as a small Combat Tracker Team during the latter part of 85’, the regiment expanded into a major fighting component of the army. SF elements penetrated deep into LTTE held territory and took out key leaders of the terrorist organization and attacked enemy bases and strong points. The regiment played a key role in the famous 87’ Vadamarachchi Operation. Additionally, during the 88’ – 89’ Southern Insurgency, the regiment assisted in the restoration of Law and Order while engaged in combat with the LTTE in the North and East.

Towards the latter part of 88’, the regiment, hitherto known as the Rapid Deployment Force was able to transform itself into a full – fledged Special Forces Regiment. Driving fear into enemy forces while acting as vanguard forces and providing flank protection for other army formations, the regiment acquired a reputation for being a hard hitting force driving fear into the enemy. During operations “Thrivida Balaya and Sea Breeze “Special Forces troops adopted novel fighting techniques through experience acquired during earlier operations. It came to a point, that no sooner the enemy identified they were up against the formidable Special Forces, they panicked and avoided contact knowing well that they would be annihilated. The Combat Motor Cycle Squadron was added making the Special Forces even more formidable.

During Jaffna Peninsula operations, Riveresa I, II, and III, the regiment acted as the spearhead to advancing infantry formations. With skills acquired in urban combat, Special Forces closed - in on the enemy fighting from well – fortified buildings and destroyed them opening routes for larger infantry formations to rapidly advance towards their objectives.

The Mullaitivu rescue operation was a historic mission under taken at a critical moment where the 1st Special Force Regiment under command of Lt Col Fazly Lafir landed by air to rescue hundreds of infantry soldiers trapped, wounded, and under siege. The garrison was completely cutoff from sea and land, and the regiment made a daring heliborne rescue operation. The Commanding Officer, and significant number of Special Forces troops died in the operation making it the most daring rescue mission undertaken during the entire separatist war. Those gallant men who died in the Mullaitivu rescue mission will be remembered by the army and the nation ‘In Honored Glory’.

Additionally, during final stages of Operation Jayasikuru, the enemy launched a ferocious counter attack causing the Army, Navy and Air Force troops to withdraw in a disorganized state. The Special Forces Regiment fought gallantly and stalled the enemy advance inflicting heavy casualties on the enemy.

In 96’, the Special Forces launched the Long - Range Reconnaissance Patrols that penetrated deep into enemy territory. Remaining deployed and concealed for long periods of time, often behind enemy lines, they directed precision air strikes on key targets including enemy leaders. They also directed accurate artillery strikes on enemy positions. The LRRP, as they were commonly known, were mortally feared by terrorist leaders. Later they known as Long Range Patrols - LRP.

Another key contribution by the Special forces was training provided to infantry regiments. With skills acquired in battle, they provided Special Infantry Oriented Training, and Advanced Infantry Training to members of other arms. Such training enabled them to confidently operate well forward of own defended localities.

When the LTTE closed the Mavil Aru Anicut in July 2006, depriving farmers of water for agriculture, the Special forces launched an operation to secure the sluice gates. That triggered what is known as Ealam War IV in the Eastern Province which finally paved way for Northern Operations that ultimately decimated the LTTE at Nanthikadal in May 2009. The immense contribution provided to fighting formations by Special Forces both during Eastern and Northern Operations is networthy.

Security Forces were finally able to decisively defeat separatist terrorism and provide freedom and security to thousands of innocent Tamil civilians trapped behind enemy lines and used as Human Shields by the LTTE.

The contribution made by the Sri Lanka Army Special Forces Regiment will be recorded in the nation’s history with pride, dignity and honor. 34 officers and 657 soldiers sacrificed their lives while a large number remain permanently disabled.

Those who fell in battle will be remembered in Honored Glory each day at dawn and at sun set, for they gave their lives for our tomorrow. What follows is a list of highest gallantry awards received by Special Forces soldiers. 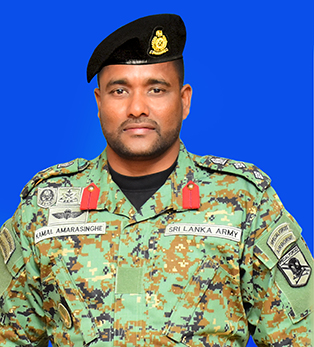 Due to increasing terrorist and anti – government activities, the Rapid Deployment Force was re - named 1 Special Forces Regiment on 10 December 88’ by Special Army Order and made its home in Naula, Central Sri Lanka. The new unit consisted of A, B, C, and D Squadrons under the command of Major G. Hettiarachchi. With a view to rapidly move across different types of terrain, and attack the enemy both during day and night, 1 SF Regiment formed the first ever Combat Rider Team with South African assistance. It consisted of two officers and thirty – five enlisted personnel. With the advent of the Combat Motor Cycle team concept, 1 SF Regiment created history in the annals of special operations forces in Sri Lanka. 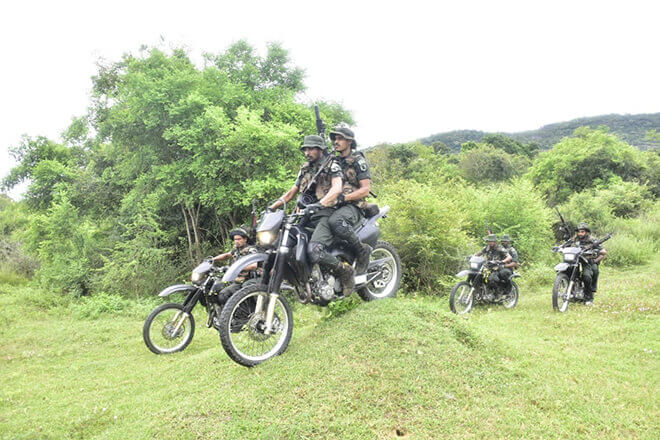 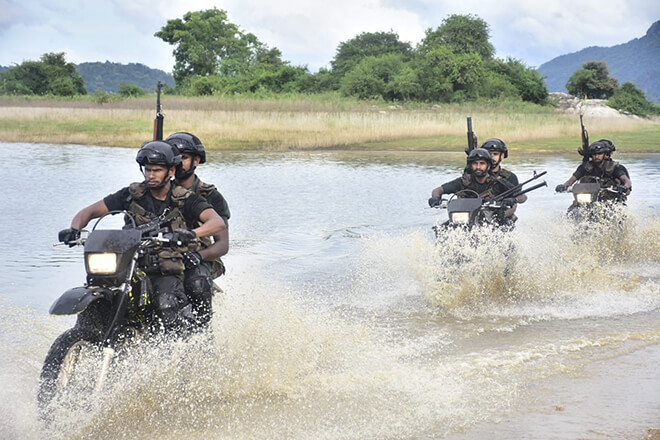 With rapidly escalating separatism in the North and Eastern Provinces, there was an urgent need to establish additional Special Forces units. Consequently, 2 SF Regiment was raised on 18 February 1994 at Monkey Bridge Camp, Trincomalee with detached B, D, and E Squadrons of 1 SF Regiment. Major D. R. Wijesiri was the first Commanding Officer in this significant battalion. With a view to acquire sea – borne operations capability, the regiment established a Combat Diver Team, simultaneously with rasing of H Squadron on 25 April 1995. Subsequently on 13 October 2010, the diving team enhanced up to a squadron to meet contemporary demands in war and peace. The unit moved to Nayaru on the Eastern Sea – Board for operations and training on 26 June 11’leaving the camp at Monkey Bridge.

Presently, the 2 SF Regiment consists of B, D, E and H, Squadrons along with the Combat Diving Squadron, and an Admin and Support Squadrons to provide functional back up. The regiment remains ready and committed to fight and win. 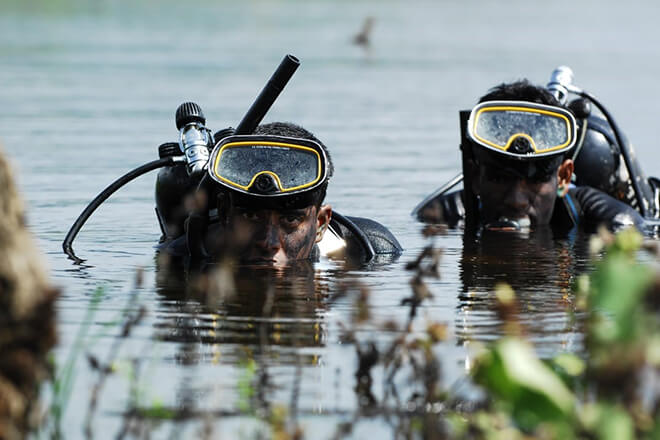 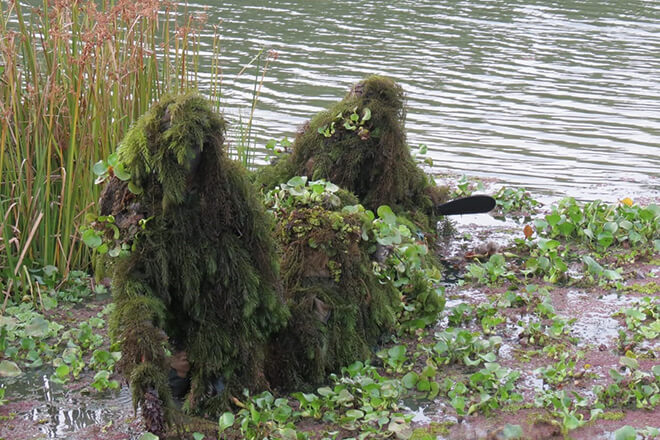 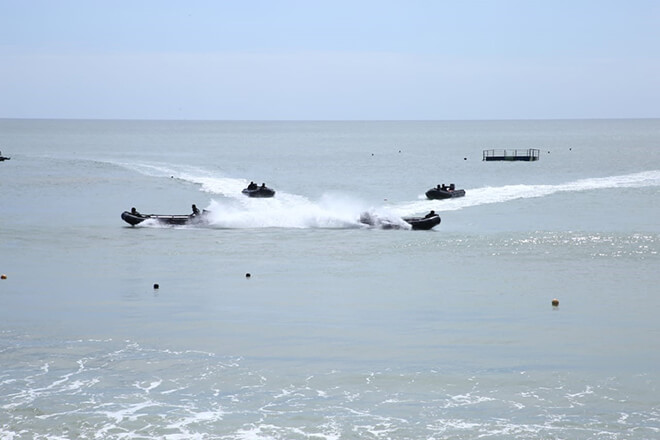 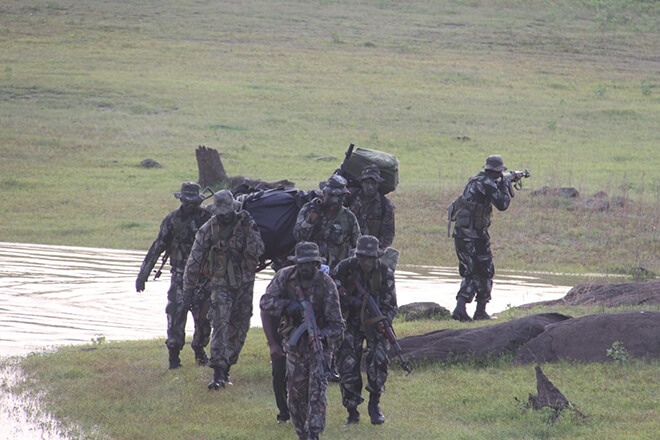 Due to evolving threat from LTTE Sea Tigers, a new regiment with sea – borne capability was formed with officers and men from other SF units on 1 August 96’. However, in order to carryout long range deep penetration operations inside LTTE controlled area, the sea – borne concept was shelved and Long Range Reconnaissance Patrol (LRRP) concept was launched on 18 Sep 96’ with officers and men from 1 SF and 2 SF Regiments who had acquired considerable experience in the battle field. For operational flexibility, and battle field necessities, 3 SF Regiment was located up - front in Vavuniya under its first Commanding Officer, Major NUMMW Senanayake, former Commander of the Army. To meet changing operational needs, the regiment rescinded J and K Squadrons and created the M Squadron.

As at present, 3 SF Regiment being the sole LRP capable unit of the Special Forces Regiment, consists of M and I Squadrons, backed by a Support Squadron and an Admin Squadron.The regiment is credited with selectively reducing the operational capability of the enemy during the separatist war. 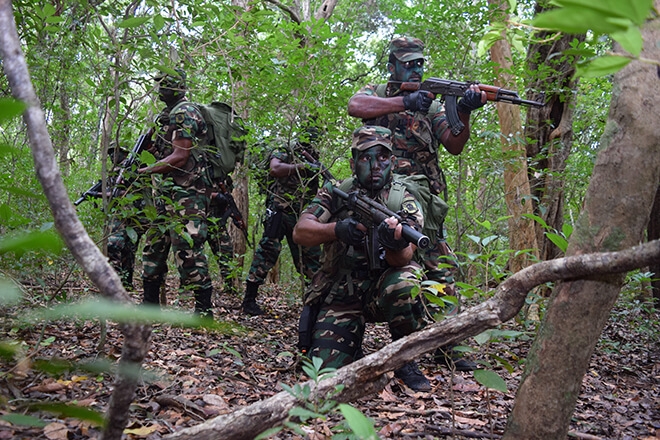 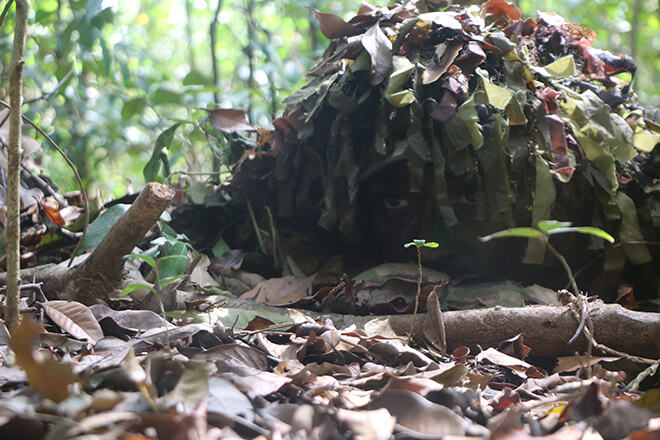 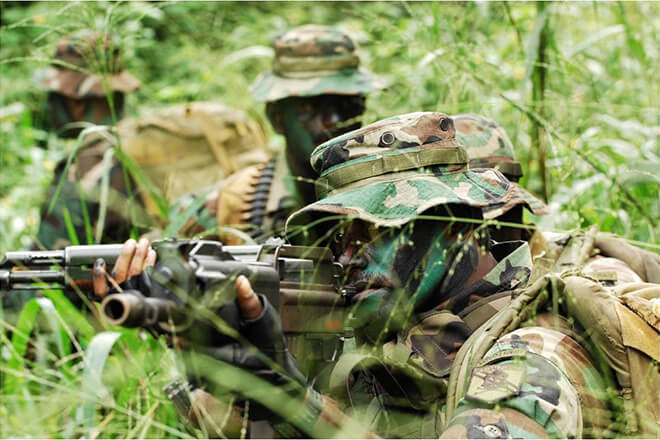 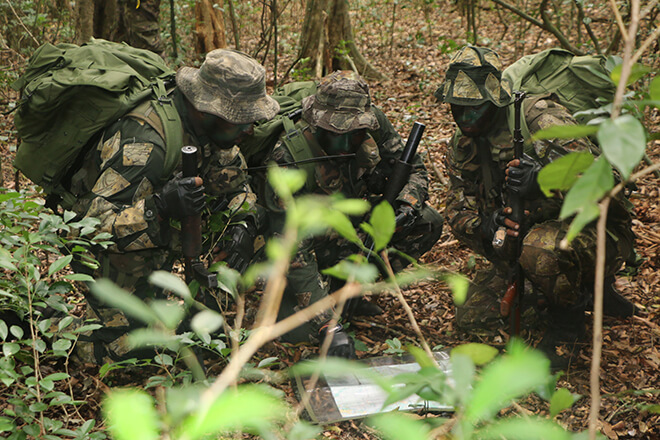 The emerging necessity for additional Special Forces troops for ongoing Northern Humanitarian Operations, 4 SF was raised at Maduru Oya, SF Training School on 15 June 2008 under the Command of Major J.P.C. Peiris RWP RSP. The regiment moved forward to Padavi – Parakramapura army camp for operational duties. Pioneering squadrons of the new regiment were; A Squadron from 1 SF, and K Squadron from 2 SF Regiments. Two new squadrons, namely, S and L Squadrons were subsequently raised with officers and men drawn from other regiments. During closing stages of the Humanitarian Operation, the regiment established its home base at Nayaru.

In order to meet operational, training, and administrative necessities, the regiment once again relocated itself at Monkey Bridge Camp on 26 June 2011. Latest addition in 4 SF is Urban Fighting Squadron, which raised on 16 April 2012.

Presently the regiment consists of four operational Special Forces squadrons include A, K, L, S and a specially trained squadron for urban combat. As in other Special Forces Regiments, functional back up is provided by Support and Administrative Squadrons. 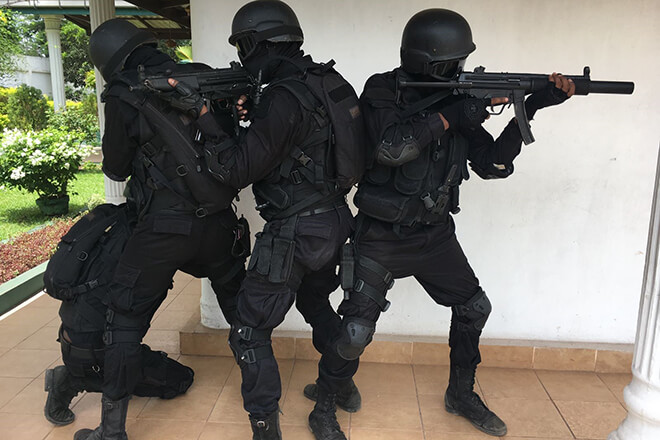 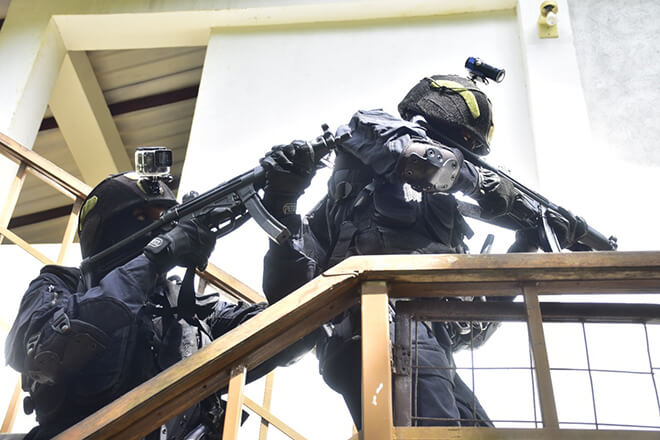 While deployed on combat related operational duties in the North and East, the special Forces Regiment came forward to assist during natural disasters and calamities. During the 26 December 04’ Tsunami, Officers and men of the Regiment helped in resettling displaced people, restore destroyed infrastructure, helped in the restoration of essential public utilities and services, provided emergency life saving medi – care, and helped in the orderly distribution of food, clothing, and temporary shelter to the displaced. 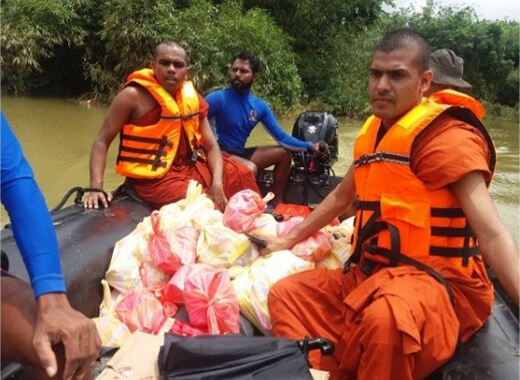 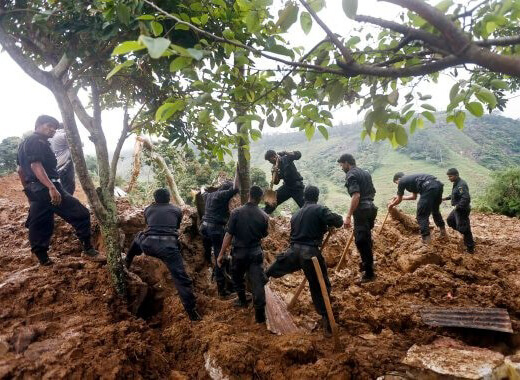 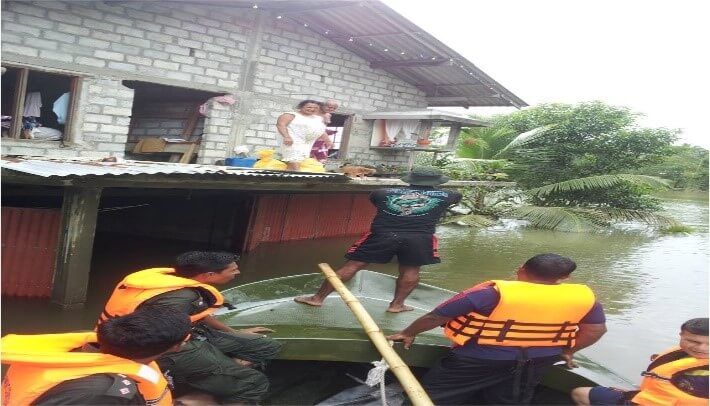 Assistance provided during after the Landslide at Aranayaka area

Troops of Urban Fighting Squadron of 4th Regiment Special Forces were participated for the disaster relief operation at Aranayaka landslide on 17th May 2016. 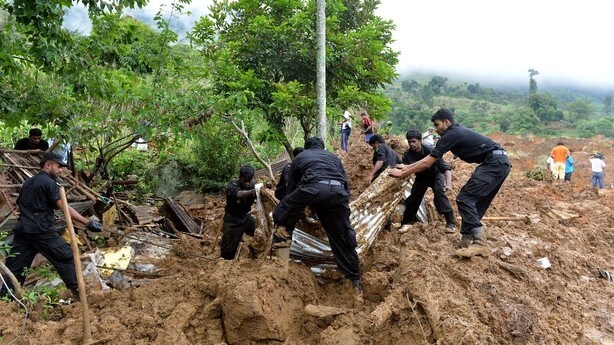 Troops of Urban Fighting Squadron and “L” Squadron of 4th Regiment Special Forces were participated for the Rescue Operation at General area Madolsima on 09th February 2021 and found the body of missing person from 07th February 2021 at Punchi Lokanthaya. 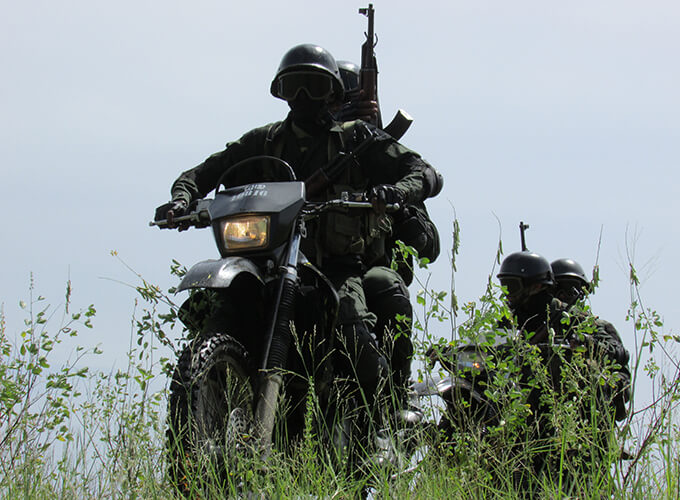 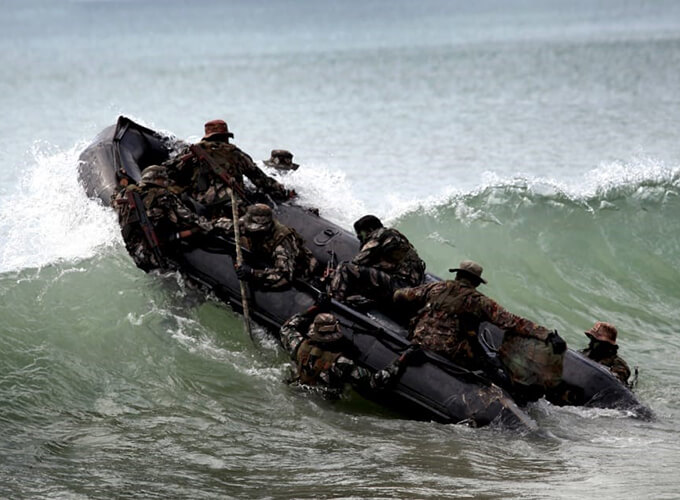 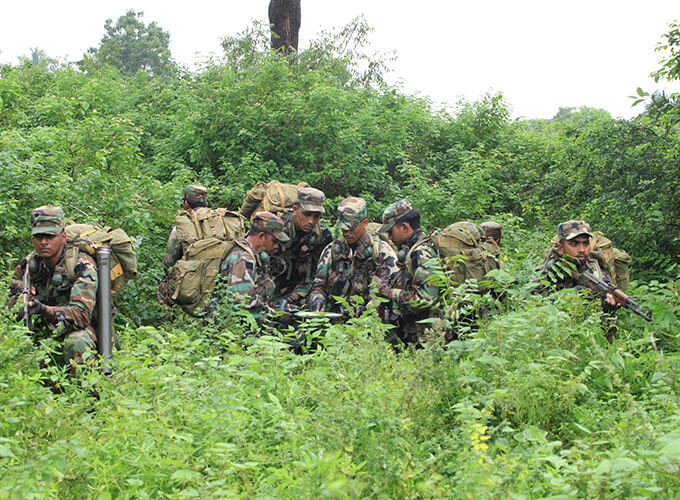 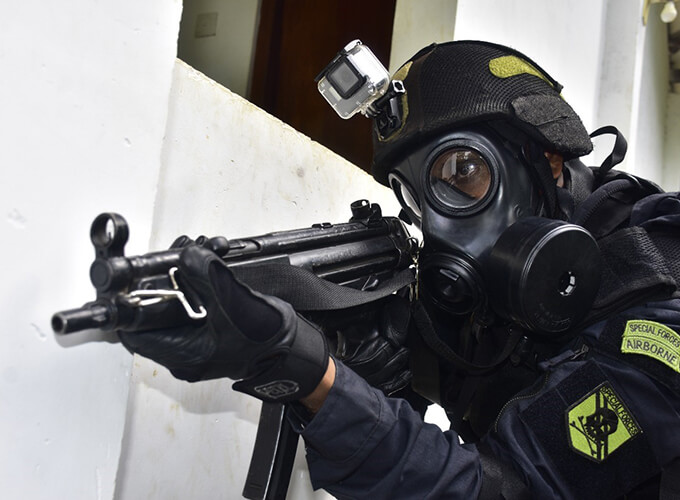