HISTORY OF AWARDING OF COLOURS

Colours are generally embroidered with mottoes, symbols, and above all with the names of battles. From the earliest times at which men fought in organized bodies of troops there had been some sort of insignia visible over all the fields of battle, serving as a rallying-point for the men of the corps and as an indication of position of the higher leaders and the men of other formed bodies. In the Roman army the eagle etc had all the moral and sentimental importance of the colours of today.

The application of the word "colour" to such insignia, how-ever, dates only from the 16th Century. "Colour" was in the 16th century, a common name in England and Middle Europe for a unit of infantry. The ceremonial observances and honours paid nowadays to the colours of infantry are symbolical of the intense regimental life and feeling.

The old soldier rallied to the colours as a matter of habit in the confusion of battle, and the capture or the loss of a colour has always been considered as a dishonour in the history of a regiment. Napoleon always attached the highest importance to the maintenance at all costs of the regimental colours . Even over young troops the influence of the colour has been extraordinary, and many Generals have steadied their men in the heat of battle by taking a regimental colour themselves to lead the advance or to form up the troops.

The colours has gold fringes or gold and crimson tassels, and bears various devices and " battle honours." Colours are carried by Subaltern Officers, and an escort of selected Non Commissioned Officers forms the rest of the colour party. The battalion gives a general salute when the colours are unfurled, and the ceremony concludes with a March past. The traditions of the Sri Lanka Army were adopted from the the British military, and is said to have been invented by the duke of Cumberland.

Sri Lankan military history is also full of reports of colours. Dating back from the ancient King Rawana, many kings and armies had used various flags in battles. The flags used by 16th century royalty and gentry are still preserved. There is a large array of flags used by various Kings and Chieftains displayed in the National Museum. There are "Dissawe Kodi" such as flag of "Ira Handa Kodiya" of Sathara Korale Dissawa and personal flags belonged to Kandyan chieftains. Colours were awarded to a Ceylon Army Unit in 1924 for the first time. 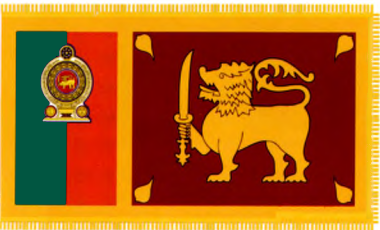 The Presidents Colours awarded on 22.03.2013 are of a Flag and a Colours Head the Flag is raised on a unique post with colour head on top. There is a unique Belt to be worr the subaltern who carries the President's Colours. President's Colours are made by placing the Government Insignia on the National Flag. There is a golden fringe around the Flag. The flag is made of a long lasting fat and the embroidery work is done with gold and silver thread. 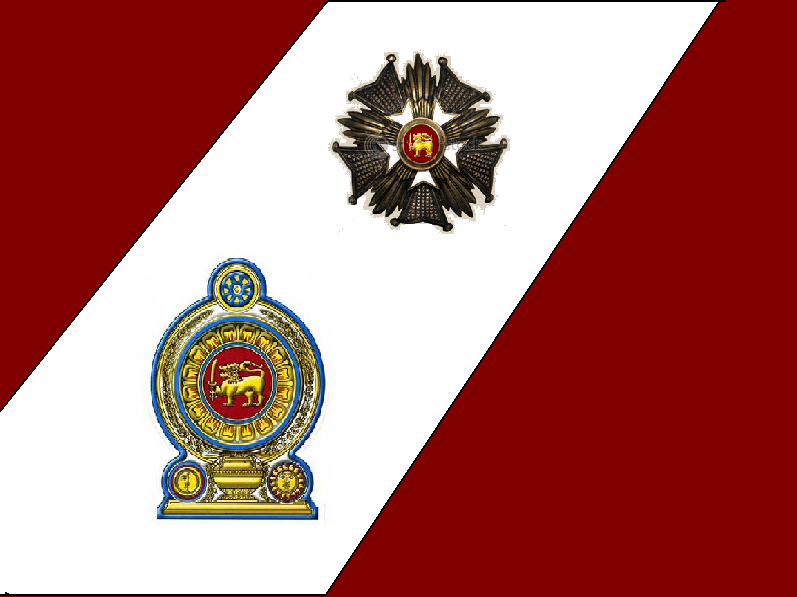 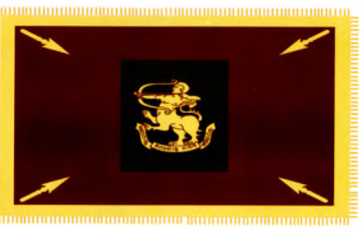 There is a golden fringe around the Flag. This fringe symbolizes the holiness and fertility. The flag is made of long lasting fabric and the embroidery work is done with gold and silver thread. There are four Arrow Heads pointed towards the Regimental Insignia at the four corners of the flag. They depict that the goodwill of the regiment is ever protected by the honest, swift, righteous and valiant troops of the Vijayabahu Infantry Regiment. 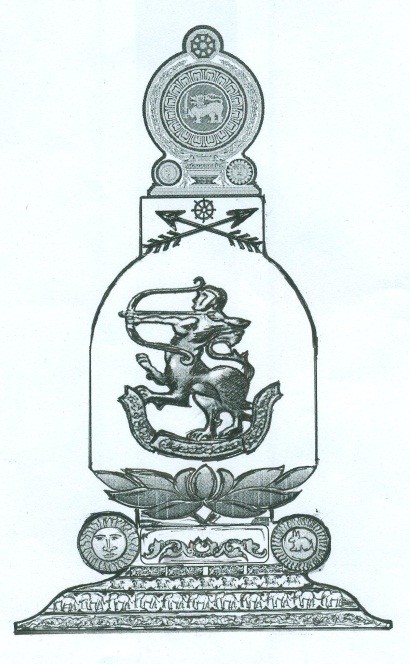 The base of the Colours Head is decorated with the animal symbols used on the moonstone of the 'Watadageya of Polonnaruwa'. The Sun and Moon above the base depict that Vijayabahu Infantry Regiment will prevail forever. The Lotus depicts purity. The bell shape is taken from the casket of the Tooth Relic wfich King Vijayabahu established at Polonnaruwa and honoured by offerings. The Arrows and the Insignia symbolize the warrior spirit of the Vijayabahu Infantry Regiment and that it always protect the county.