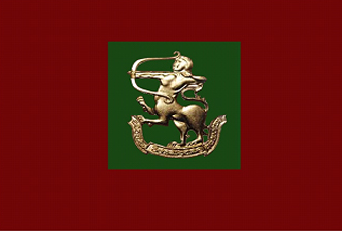 The emblem of the Vijayabahu Infantry Regiment is called "Dhanurdhara; The Archer". The Lion body symbolizes the nation, personality and strength. The king of the Animals always represents nobility, courage, bravery and gracefulness. The Archers torso represents the human intelligence combined with the strength of the Lion. The fore legs of the lion are raised and are in a combat posture. The archer's bow is drawn and ever ready. The bow with the arrow indicates the focus and determination. The Archer stands on the motto of the Regiment; Samarthanang Athibharankang.

COLOURS OF THE FLAG

Maroon depicts the robustness at war. Green indicates the life and the fertility of the land. Gold depicts the purity of thoughts and intelligence.