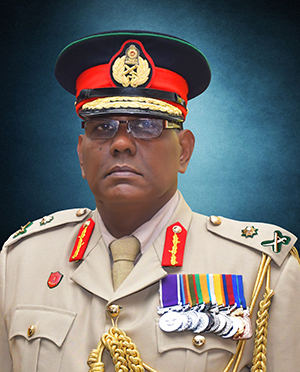 Major General J D C G Jayasinghe is a reputed military officer who has been serving to this prestigious organization and during the past era when the country placed anarchy with the emergence of terrorism sacrificing his life to safeguard the motherland. The senior officer has performed duties in both operational and non-operational areas and is a battle-hardened officer who was injured in the battle. He has counted over 34 years of commissioned service and a well-nurtured descendant of the Gajaba Regiment.

He is a proud product of Sri Somananda College and Sri Subhuthi Central College and after completing his secondary education, he joined the Sri Lanka Army Volunteer Force with the Intake 3 & 4 on 14 February 1986. After the successful military training at Sri Lanka Military Academy, he was commissioned as a Second Lieutenant on 27 June 1986 and posted to 2nd (V) Battalion of the Gajaba Regiment.

He is married to Mrs Devayani Kalinga and blessed with two daughters, Eesha and Timali.

Copyrights protected: All the content on this website is copyright protected and can be reproduced only by giving the due courtesy to www.slavf.lk/
Copyright © 2021 Sri Lanka Army Volunteer Force