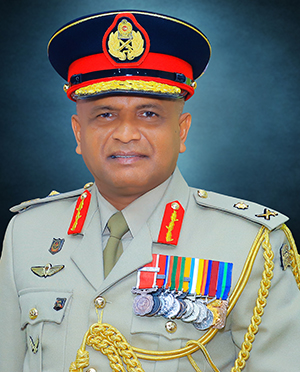 Major General Senarath Yapa was born on 2nd June 1968 and he is a proud product of Piliyandala Central College. During the period of schooling, he has excelled in academics and athletics earning honour and fame to his Alma Mater.

He joined the Sri Lanka Army as an Officer Cadet on 16th March 1987 under the Intake 27. Upon successful completion of the basic military training at the Sri Lanka Army Military Academy, Diyatalawa, he was commissioned in the rank of Second Lieutenant and was posted to the Gajaba Regiment (GR) which is an elite infantry regiment of the Sri Lanka Army in 1988.

He assumed duties and responsibilities as the Platoon Commander of 3rd Battalion of Gajaba Regiment on 10th December 1988. In view of accomplishing errands of a true serviceman, young Keterian joined the Sri Lanka Army Special Forces (SF) which is ready to undertake contingency tasks as a force of deterrence for the defence of the nation, dedicating his whole life voluntarily on this soil behalf. Accordingly, he successfully completed the Special Forces Basic Course No. 06 and was blessed to be a member of the great lineage of successors of the Sri Lanka Army Special Forces on 10th October 1989.

Further, he has held the appointment of General Officer Commanding of 57 and 14 Infantry Divisions in Kilinochchi and Colombo respectively. He served as the Commander of Security Forces (West) and (Jaffna) prior to his taking over duties as the Commandant of the Sri Lanka Army Volunteer Force.

Indeed, professional enhancement of the senior officer in local and overseas arenas enlightens career, providing stream of experiences and knowledge. Major General Senarath Yapa received the opportunity to participate in military training programmes such as Defence and Strategic Studies Course and Leadership Programmes under the Army Headquarters in Sri Lanka in 2010. As well, training programmes such as Basic Parachute Course (1991) in India, Commando Course (1992) in India, Young Officers’ Course (1996) in India, Mid-Career Course (1996) in Pakistan, Military Observer Course (2012) in India, and Battalion Commanders’ Course (2013) in China gathered an array of foreign experiences that heightens his military career.

The senior officer has been adorned with gallantry awards of Rana Wickrama Padakkama (RWP) three times for individual or associated acts of bravery in the face of enemy and performed voluntarily. He was also decorated with Rana Sura Padakkama (RSP) four times for his distinguished conduct in the face of the enemy.

At present, the senior officer is performing duties as the Colonel of the Regiment of Sri Lanka Army Special Forces whilst serving as the Commandant of the Sri Lanka Army Volunteer Force.

Apart from his hard earnings as a professional outfit and a well experienced military leader as per the nature of duties vested on his shoulders, he became an environmentalist heading hand in hand with the national endevour of protecting the nature.

Major General Sujeewa Senarath Yapa is married to Mrs. Nayani Samanthi and they are blessed with two sons.