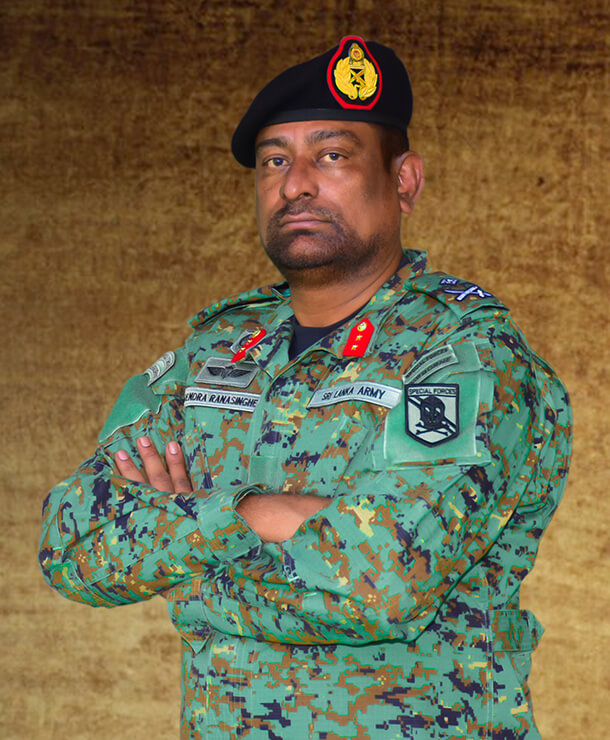 Major General Harendra Parakrama Ranasinghe is an Officer of Sri Lanka Army Special Forces. He was born on 18 March 1967 in Colombo and is a proud product of Thurstan College - Colombo.

After completing his school education, he joined the Sri Lanka Army as an Officer Cadet on 27 October 1986 and was commissioned on 23 July 1987 and was posted to the prestigious infantry regiment, the Gamunu Watch. In 1990 he voluntarily joined the Special Forces and followed Special Forces Basic Course No 07.

Major General Harendra Ranasinghe is a proud graduate of the prestigious National Defence College in New Delhi, India. He has attended number of military training courses locally as well as overseas such as India, Pakistan, China, UK, Singapore, and Jordan.

Major General Harendra Ranasinghe has been awarded with two Gallantry Medals “Rana Wickrama Padakkama” and “Rana Shura Padakkama”, multiple times for his valour and bravery in the Battlefield in the face of the ruthless terrorists. He continued to serve in operations despite being injured during direct confrontations with insurgents.

He is an officer who has an impeccably consistent recorded service of 34 years maintaining a clean and an unblemished record of conduct. He is married to Mrs Priyanthi Ranasinghe and is blessed with a son.